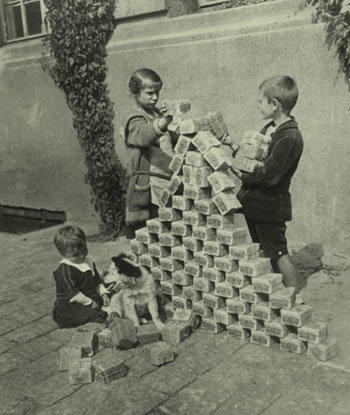 1923 saw the Weimar Republic in Crisis. Suffering from Hyperinflation, the Republic had to cope with uprisings at home and the economic and political consequences of the Treaty of Versailles. The events of 1923 in Weimar Germany are incredibly hard to relate to. In this post I’ve written about a number of resources that hopefully help to make the topic more accessible for GCSE History pupils.

In many (if not most) cases the different elements of crisis in 1923 will be taught separately as stand alone activities on the occupation of the Ruhr, Hyperinflation and the Munich Putsch.

Resources and information on these topics are found below:

Occupation of the Ruhr

Given that surviving the various crisis of 1923 marked a turning point in the History of the Weimar Republic I tink it is worthwhile stopping and reflecting at this point.

Clearly there is scope for lots of discussion and debate at this point:

– How did the Republic survive?

– What stayed the same?

– What did ordinary Germans think at the beginning and end of 1923? Had attitudes really changed?

– What does the future hold for Germany?

In previous posts I’ve suggested creating characters who work their way through the Weimar period. I like this idea as it provides some concrete examples. At this point in a scheme of work I think that this sort of approach would work well. How have things changed for x,y or z? Are they optimistic or pessimistic? There are some characters of this type in this Facing History resource pack (PDF File) – which may need adapting for this period.

A useful plenary to summarise events upto and including 1923 would be completing this diagram for revision purposes.