The BBC Learning Zone provides short clips from broadcasted programmes that can be used in the classroom. The clips have been selected by teachers and are accompanied by a brief narrative and ideas for use in the classroom. The section on Weimar and Nazi Germany currently comprises 34 video clips ranging from 1 minute to 8 minutes in lenght: ideal as stimulus materials. 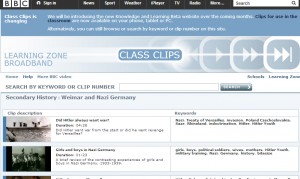 I’m often suprised by colleagues who aren’t aware of this little gem. The BBC Education team utilise BBC broadcast footage to provide short, relevant clips that are useful in the classroom. The clips are selected by teachers who provide ideas for use in the classroom alongside each of the clips. The overall bank of clips on offer is quite staggering and the site is most definately one to recommend to colleagues in other subject areas.

The content of the unit on Weimar and Nazi Germany is much stronger on the Nazi Germany element than it is for the Weimar period. There is a nice overview of the establishment of the Weimar Republic and a clip covering the early problems faced by the Republic. The ‘Golden Age’ is also covered, along with a clip assessing the weaknesses of the consitution.

Most aspects of specified content for the Nazi State are covered in the Learning Zone. The only glaring ommission that I can spot is that there is nothing in this section relating to the Holocaust: though there are plenty of Holocaust related clips elsewhere on BBC Learning Zone.