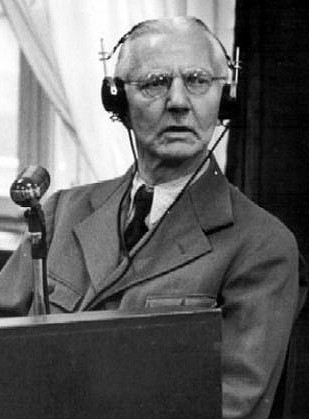 Schacht served as President of the Reichsbank until 1939 and following this he was a Minister without Portfolio until 1943. Schacht had been in a position of power prior to the Nazi Party gaining control of Germany.

Prior to the Nazi regime Schacht had worked his way through the ranks of the German banking system. He was appointed to manage banking in the early days of the Weimar Republic and was one of the economists in charge of dealing with the Hyperinflation Crisis that shook the German economy in 1923.

Such was Schacht’s ability, he was involved as a German delegate in the negotiations for both the Dawes Plan (1924) and the short lived Young Plan (1929).

After resigning as President of the Reichsbank, Schacht, along with other leading economists, helped to form the Harzburg Front. This was a right ing coalition who were willing to work with the Nazi Party in order to undue some of the ‘wrongs’ that the Weimar Government were implementing: the Young Plan was critisised for the levels of reparation payment that Germany agreed to pay.

When Hitler became Chancellor he turned to Schacht and appointed him as President of the Reichsbank in March, 1933. Schacht also was given the role of Minister of Economics.

Schacht worked quickly to make adjustments to the German economy. He struck favourable deals with other counties. He also utilised his knowledge to encourage a competitive market place and established an Organisation of Industry’. This Organisation of Industry was a combination of former workers organisations, employers and chambers of commerce. This enabled the government to implement policies quickly and quite efficiently.

In 1935, Schacht was given the job of preparing the economy for war. This gave him an enormous amount of power. His remit now, was to engage in rearmament as well as strengthening Germany’s economic and Industrial base.

Schacht’s role from 1935, to his resignation from this position in 1937, included overseeing the Public Works programmes that were essential to reducing Unemployment, kickstarting the rearmament programme and building up a strong base of provately run enterprises. Following his resignation as Minister for Economics, Schacht remained on the Cabinet.

Schacht was reappointed to the Presidency of the Reichsbank in 1938 and in January 1939 he began negotiations with Britain over the migration of German Jews. It was a plan tied to increased exports and would see Jewish wealth reallocated – between the Jewish migrants and Germany. The plan never materialised as Schacht was dismissed from this position, though not from the Cabinet.

Following Schacht’s removal from both the positions of Minister of Economics and as President of the Reichsbank he continued to play a role in government. However he was disllusioned with policies and critical of the level of investment in rearmament: Schacht believed that the German economy could not withstand a prolongued conflict.

Following the Staffenbourg Bomb plot, Schacht was arrested. He remained in captivity until the end of the war. He was found to be complicit in the German preparations for war but the actions that he had taken himself were not deemed to be criminal. After some legal wranglings, Schacht was granted freedom in 1950. After this he reentered the financial world. Schacht died in 1970.

Was Schacht an effective economist?

His record is quite impressive. He played a large part in stabilising the economy in 1923 and a more substantial role in its management from 1933 onwards. He was able to juggle the different elements of the economy and German Industry made good progress as a result of his policies. However, he was a little too cautious in his methods for the liking of senior Nazi officials. They wanted higher levels of investment in Rearmament.

Management of the Four Year Plans was transferred to Hermann Goerring following Schacht’s resignation from that position.