A recently published book highlights the ways in which Hollywood responded to the Rise of Hitler and the Nazi Party. In
Hollywood and Hitler, 1933-1939, Thomas Doherty illustrates the way in which Warner Brothers used a series of articles in the New York Post to make ctricisms of the Nazi Regime. 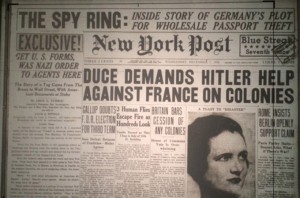 The book is summarised in an excellent review on the NYPost website. The review provides an excellent summary of the books contents and is, in itself, a useful resource for students wanting to learn more about the way that The Nazi’s and Hitler were viewed in other countries.

The main points are that Hollywood in general was reluctant to openly criticise Hitler. This is simply for financial reasons, Hollywood films were highly popular in Germany and any open criticism of Hitler would almost certainly result in the censorship of American Films in Germany.

Some studios were more open in their dislike of the regime. Warner Brothers for example had particular reason to dislike and critise the regime following the beating up of one of their Jewish employees in Germany. This resulted in productions such as Confessions of a Nazi Spy, which was released in 1939.

The book, though quite expensive, appears to be a highly interesting read: