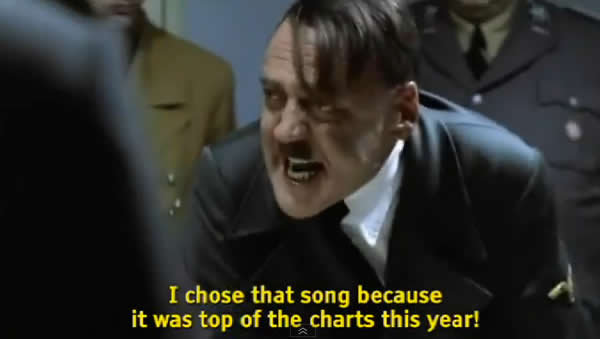 Last week on Twitter I posted this link to a page I created a long time ago about Music that Can be used in History Lessons. I also asked for suggested additions to a list that I was well aware was far from complete. The original list had a reasonably impressive 145 songs listed. I set a target of raising it to 200… target smashed… it’s over 300 now.

Please note that the list was never initially intended to relate solely to Weimar and Nazi Germany. It’s posted on here as most of my Twitter usage relates to things to do with this site and I’m assuming that makes here the best place to put the update.

Please add to the list by entering suggested additions as comments.

Reach for the Stars – S-Club 7

If you tolerate this …. Manic St Preachers

POV of man medically unfit for army during WWII

Weddings Parties Anything ‘Scorn of the Women’

@DPHistoryCom: Weddings Parties Anything ‘Scorn of the Women’ POV of man medically unfit for army during WWII

Stand and Deliver – Adam and the Ants

@MrsHall_History: its by Adam and the Ants. Great video too. http://t.co/ZIeqGtQR1D

Freddy and the Dreamers / Dick Turpin

Tony Capstick / Lloyd George kept me out of the workhouse

Sean McDermott
@scjmcd
@MrsHall_History @danmoorhouse Like that one. ‘I’m a dandy highwayman’ the kids would love that one!

Claire Hall
@MrsHall_History
@danmoorhouse any by ‘HistoryTeachers’ on YouTube. Like this one youtube.com/watch?v=wXsZbk…And Mrs Hall also pointed out that there are other videos of this nature on the ‘History Teachers’ Youtube account. Another 56… so instead of typing them all out, heres the link… History for Music Lovers

Active History host an outstanding series of Spotify Playlists. Totally 117 songs (some of which are already in my list) it covers 15 content areas. Amazingly 100 of the songs Russel has included are not mentioned elsewhere in this list!