MrAllsopHistory.com is a revision site, unsurprisingly, developed by Mr Allsop. Scott teaches at an International School in Egypt and has previously taught – very successfully – in schools in the UK. His site contains a range of excellent materials for use in the classroom, or by pupils as revision aids. 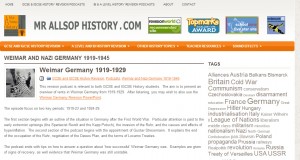 The key feature of Scott Allsop’s History website is the collection of revision podcasts and videos that he has put together over the years. He is probably best known amongst History teachers’ for his outstanding use of the Billy Joel song, ‘We didn’t start the fire.’ As fantastic as that resource is, it’s not relevant to the content of this site – though it did deserve a mention!

The great thing about Scott’s site is that it is simple and effective. Pupils can’t lost, there’s no big words to put them off, it’s not stuff and over powering in its analysis of things. No, it’s exactly what pupils tend to like. It’s to the point, accessible and covers the main points via easy to download podcasts and streaming videos.

Here’s one example of his resources. This is (clearly) the video version, an mp3 version is also downloadable from the site:

A full list of Mr Allsop’s revision podcasts can be found and downloaded from here.

His YouTube Channel which includes a large selection of handy clips on a range of topics, can be found here.