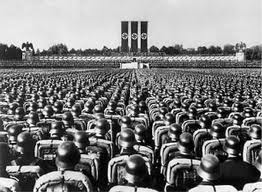 Teaching Resources for activities on Weimar and Nazi Germany. Resources are initially listed in chronological order, followed by  any resources that cover a range of issues or periods.

The Spartacist Uprising. Selected resources and learning activities from around the web, mixed in with some of our own ideas.

The Kapp Putsch. Teaching ideas and links to resources about Kapp’s failed Putsch.

Hyperinflation in Germany: 1923. An active learning activity designed to illustrate the impact of Hyperinflation.

1923: A Year of Crisis for Weimar Germany. Best of the web. Our favourite finds for this topic.

Gustav Stresemann: How successful was he?

The Electoral Appeal of the Nazi Party. Resources, figures and teaching ideas.

The Rise of the Nazi Party. An overview of a sequence of activities that culminate in a fascinating cross sector ‘Mr Men’ activity.

How did Hitler become Chancellor of Germany in 1933?

The Reichstag Fire. A great set of  role-play activities along with a useful presentation.

The German Economy under the Nazi’s (1933-1939). Ideas and resources collated for use when teaching this topic at GCSE level.

Night of the Long Knives

The Nazi Propaganda Machine. A series of resources to use when teaching about Propaganda in Nazi Germany.

Using Maps to Teach the History of Weimar and Nazi Germany

Facing History: Weimar Germany. Detailed lesson packs covering a range of issues up to and including Hitler being appointed as Chancellor.

Using QR Codes to create a Weimar Treasure Hunt. An overview of some excellent lesson resources created by Russell Tarr.