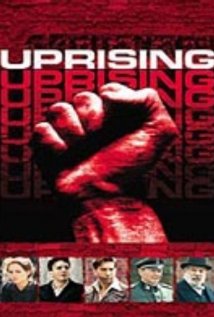 Uprising is a film made in 2001 about the Warsaw Uprising. The film is based on a true story. The Warsaw Uprising was something that the German troops were not anticipating. As they entered the Warsaw Ghetto to clear it in 1943, they met fierce, organised resistance. This was a stark contrast to the previous deportations that had been conducted in occupied territories. 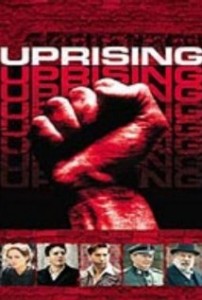 The film Uprising is a fascinating true story about the way in which Jews in the Warsaw Ghetto fought the Germans to try and prevent deportation. The film captures the desperation, hunger and appalling conditions that Jews in the Warsaw Ghetto endured. In the film the realisation that the fate of the inhabitants of the Ghetto is almost certain death is portrayed extremely well. This is particularly helpful for pupils studying the Holocaust and the Persecution of the Jews. It also makes it clear that news from places such as Auschwitz did spread to the wider world, helping to dispel the myth that nobody knew about the Final Solution.

Uprising also shows several ways in which the Jewish community was manipulated and exploited. In one scene, for example, a Jewish elder is given the task of raising 230,000 Polish Zloty’s by 6pm the following day: a thankless and nigh on impossible task.

Scenes illustrating the making of the film, ‘The Eternal Jew’, are also included within Uprising. These scenes may be useful as clips to use when looking at the way in which Anti-Semitic Propaganda was created, and in looking at the types of messages that the Nazi State was trying to put across.

The actual uprising itself is, as expected, fairly bloody. Teachers’ will have to use their own professional judgement as to whether or not it would be appropriate for a class or individual learner to be shown these sections – indeed, the relevance of these scenes is limited in terms of what most specifications ask for.

The film can be purchased on Amazon:

At the time of writing a full copy of the film was available on Youtube (see below). I assume that it will be removed at some point as it does not appear to be an official upload…