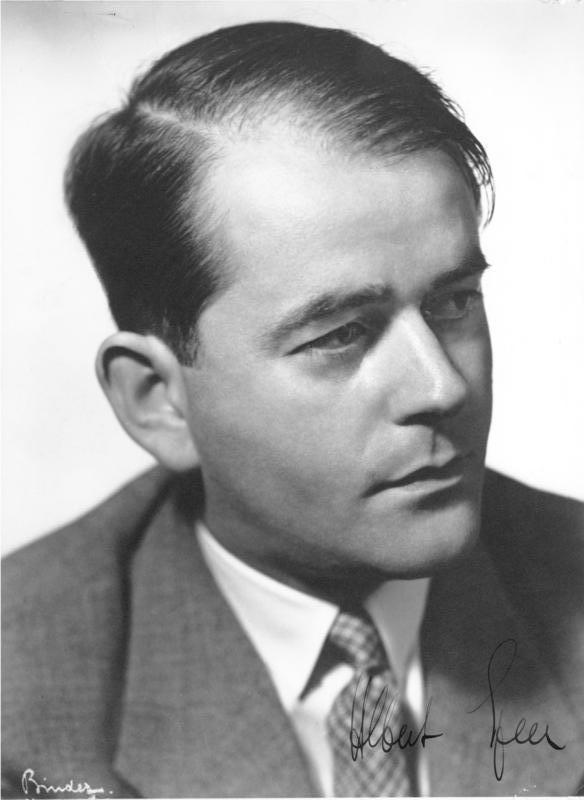 Albert Speer was the Minister for Armaments and War Production from 1942 until the Allied victory in 1945. Speer was an architect by trade. He joined the NSDAP in 1931, quite late for one who was to rise to a position of such authority.

Speer’s membership of the NSDAP was mainly due to the appeal of Hitler. He was introduced to the Fuhrer and through this connection began to profit from his party membership. His designs were used at party rallies from 1933 onwards.

Speer’s organisation ability and his vision for a grandeois Germany impressed Hitler. Speer was given commissions to design all manner of things. These included Germania, a conceived but never built city and many of the now infamous buildings associated with the Nazi Regime.

In 1937, Albert Speer was appointed Inspector General of the Reich. This involved reconstructing German cities in a style favoured by Hitler. By the outbreak of war, Speer was a section leader in the German Labour Front and was also in charge of the Beauty of Labour programme. Through these positions, Speer was able to exact a great deal of influence. He was efficient and highly organised. His projects, put simply, delivered.

When Fritz Todt died in an air crash, Albert Speer was the obvious choice to replace him as Minister of Armaments and War Production. His organisational skills and his willingness to make use of forced and slave labour, led to a huge increase in wartime productivity: of military items. For example, in 1944 the prodction of Tanks was 17,300, wheras in 1941 it had been only 2900: and this was achieved at a time when the tide of the war was turning against Germany. Other machines for use on the front lines also increased, from 9540 in 1941 to some 35350 frot line machines in 1944 (Source: Who’s Who in Nazi Germany, Robert Wistrich).

Speer’s obvious success in increasing wartime production is claimed to have extended the war by up to two years. He achieved it in part through the use of enslaved people and forcing Prisoners of War to participate in works. It was also down to his allocating of resources, attention to detail and determination to get the job done.

Speer was not a stereotypical Nazi though. Hitler gave orders to destroy German Industry in the face of advancing troops. Speer did not comply with these orders in full. At the Nuremburg trials, it was noted that Speer had realised that the war was over; that destruction of Industry was pointless and that through standing up to Hitler in the final months of the war (unlike other senior Nazi Party officials) he was doing something to enable a Post War recovery within Germany. This being the case, the Allies, though finding him guilty of War Crimes (due to the use of Slave Labour) did not impose the death sentence. Speer was the most senior Party official who served at the end of the war to be found guilty and not be executed.

What was Speer’s impact on the War Economy?

Massive. He was a highly organised and efficient leader. He was willing to do whatever it took to get his job done. Production rose dramatically, despite the fact that the Allies were bombing the Industrial Heartland of the Third Reich. His emphasis on armaments and prodiction for the war effort obviously came at a price for ordinary Germans. It will come as no great surprise that consumer goods and luxury items were not on Speer’s war time agenda.