Albert Speer began his career as an architect and as a result of his work in this field became known to Hitler. His efficient manner led him to gain promotion within the Nazi Party. During the war years he was promoted to Armaments Minister. At the Nuremburg Trials, Speer was tried as a war criminal.

Albert Speer is a person who is hard to fathom in some ways. He is termed ‘The Good Nazi’ by some, as a result of his testimony at the Nuremburg trials – in which he accepted collective guilt for atrocities. Certainly in his work prior to the outbreak of the Second World War there appears to be little on his CV that suggests he was a ‘Henchman’ or a Nazi thug. He was clearly a highly intelligent, hardworking and quite innovative architect. Albert Speer designed numerous well known buildings: much of the Nuremburg Rally site was Speer’s work, and he developed the plan for Germania.

The source of controversy over Speer’s work comes from his time as Minister for Armaments. Given the post in 1942 it is argued by some that his work extended the war by over a year, indeed in the documentary posted above, one person claims that Speer extended the war by at least two years. This is both an outstanding achievement and a suggestion that sends shudders down ones spine. Albert Speer was highly efficient. No dounting that. Under his leadership munitions manufacturing increased: no mean feat in the second half of a war that Germany was, by then, losing. How he achieved this is the area of contention. With skilled workers enlisted into the Wehrmacht there was an obvious solution: forced labour. Whilst at his trial Speer noted that the removal of Jewish workers from his factories to the camps caused him problems, his ministry simply replaced them with forced labourers of different origins.

What does make Albert Speer stand out is his testimony. He was the only member of the Nazi hierarchy to accept responsiblity of any kind. He had also counter-acted Hitler’s scorched earth policy in the latter stages of the war, an act which at least allieviated the suffering of some for a short while.

Historians are divided about his role. I can certainly see why. His architecture is inspiring. That side of his work made him probably the most powerful ever architect as a result of where it placed him in the Nazi hierarchy. That side of Albert Speer, I can admire. The Speer who ran armaments, I cannot though. Despite admissions of collective guilt, he was Minister in charge of labour camps that systematically forced hundreds of thousands of people to work themselves to the point of death. 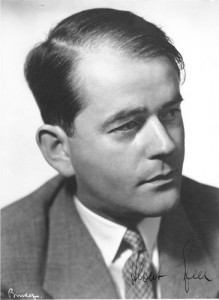 One thought on “Albert Speer”