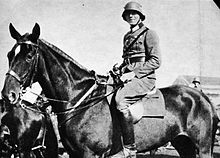 Claus von Stauffenberg was a German aristocrat who became best known for his role in the failed July Bomb plot of 1944. Stauffenberg hailed from the German nobility and followed in the footsteps of many of his family by joining the Reichswehr. He became an officer and served in the Wehrmacht in Czechoslovakia, France, on the Eastern Front and in Northern Africa.

Stauffenberg’s background led him to have fairly fixed and conservative beliefs about many things. He was supportive of the Nazi Regime in some ways but, from an early point, was concerned about elements of their policies.

Stauffenberg’s role in the opposition to Hitler was relatively short compared to that of other leading opponents, such as Beck. Despite being related to some opponents of the Hitler led regime and invited to conspire in the early days of the war, it was not until his participation as an officer in Operation Barbarossa that he voiced any real opposition.

Whilst on the Eastern Front, Stauffenberg refused to implement the ‘Commissar Order’. Instead, he felt that many of the captured Soviet forces could be transferred, to his Ostlegionen. Evidence presented after Stauffenberg’s death also suggests that he spoke out against the actions of Einsatzgruppen: ie, he opposed the shooting of the Jews of Eastern Europe.

Stauffenberg maintained contact with people who were opposed to Hitler at this time. This included members of the Kreisnau Circle. However he did not actively conspire at this stage.

Claus von Stauffenberg’s active involvement in the opposition movement began in 1943. He had been wounded whilst serving in Africa. Whilst recuperating at his family home, his opposition became greater and he soon became a leading conspirator.

Stauffenberg and his co-conspiritors saw an opportunity. A plan called Operation Valkyrie was in place. This plan was designed to take control of key positions within Berlin in the event of a coup d’etat against Hitler. The plan involved the Replacement Army (the Ersatzheer) taking control of these key locations. The plan was known to the leadership and to those in command at these locations. The plotters saw a chance. The head of the Ersatzheer was sympathetic to the conspiracy. He also was Stauffenberg’s immediate superior. If the plotters could launch their own coup d’etat, the plans already in place to secure the Government could be used against the state, rather than to protect it.

Plans were formulated to assassinate Hitler. Initially the idea was to also kill Georing and Himmler at the same time. However Himmler rarely attended military meetings that the conspirators intended to execute their plot at. this led to several aborted plans to explode a bomb near the leadership.

The Allied D-Day landings in Normandy in June, 1944, made the end of the Nazi Regime even more obvious to the plotters. Action was required sooner, rather than later. Some of the consiritors had access to military planning meetings that Hitler held. Staffenberg was one, General Stieff was another. The plan was to have Stieff deliver a bomb at one of Hitler’s meetings. Upon it exploding, Stauffenberg would then implement Operation Valkyrie in Berlin.

The plan had to be altered when General Stieff said that he felt unable to carry out his role. Instead, Stauffenberg himself was now to deliver the bomb. This made the plot a little more complex. He would have to plant the bomb, leave the meeting without raising concerns and start to make his way to Berlin whilst the bombs timer ran down. Upon returning to Berlin, he could then co-ordinate Operation Valkyrie.

On July 20th,1944, the plan was put into action. A bomb was left in the meeting room with it’s timer set. Claus von Stauffenberg managed to leave the meeting and begin his return to Berlin. The bomb did explode. However, the suitcase it had been placed in had been moved. Whilst two people were killed and many seriously wounded, Hitler himself escaped with relatively minor wounds.

The conspititors in Berlin were unsure whether Hitler had been killed. Instead of instigating Operation Valkyrie immediately, they paused to await clarity. Soon, this pause became their downfall. It emerged that Hitler had survived the plot quite soon after news of the explosion had broken. Valkyrie was not put into motion. The leaders of the plot were quickly arrested: many of them that same evening. Claus von Staffenberg was executed that night.