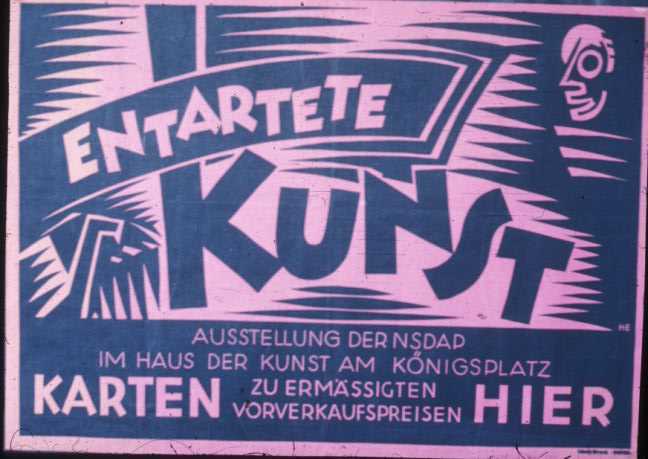 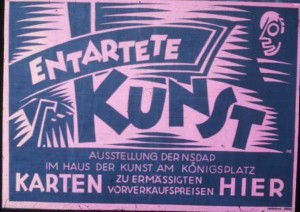 That was how Adolf Hitler described modern artists who were members of movements such as Dadaism or Surrealism. Hitler was an admirer of more traditional and classical artwork. He viewed much modern artwork as being degenerate in nature, motivated by Communist ideals and as being attacks on decent, hard working Germans.

In 1936, Adolf Ziegler and Josef Goebbels came up with the concept of an exhibition of Degenerate Art (Entartete Kunst, in German). It was to run alongside a more favourable exhibition of classical German artwork. Hitler agreed that such an exhibition would be worthwhile as it would illustrate the decadence of the previous regime, highlight the mental illnesses of such artists and demonstrate the superiority of the German race and the weakness of mind of artists of the Dada and Surrealism movements.

The Entartete Kunst exhibition of Degenerate Art opened in Munich on 19 July and was open until to 30 November 1937. Over two million people visited the exhibition: more than double the number of visitors to the exhibition of classical German artwork that ran concurrently. The exhibition included 650 paintings, sculptures and prints from 112 modern artists. The artwork was chosen from almost 6000 pieces of art that were seized from Museums and galleries across Germany in preparation for the Munich Exhibition. Some were arranged thematically: art that was anti-religious; art that was by Jewish artists and art that was damaging to German Workers, Women or Soldiers.

Following the exhibition in Munich similar, though smaller, exhibitions were held in other major German cities, including Berlin and Leipzig. Some of the artwork was then sold off, mainly to foreign art collectors. Over 5000 pieces of art that had been collated for the exhibition of Degenerate Art were eventually burnt by the Nazi authorities.

The video below is a documentary about the 1937 Munich Exhibition of Degenerate Art.