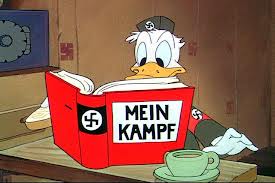 Der Fuhrer’s Face is one of a number of Wartime Propaganda films that the Disney corporation were commissioned to make during the Second World War. Made in 1944, the cartoon is a very good example of the view that the Allied leaders wanted people to have of Nazi Germany. Whilst it uses friendly, well known Disney characters and is humorous in places, there is a very strong message being put forward in this film.

Der Fuhrer’s Face is a cartoon. Pupils enjoy watching it. They find is quite amusing on the whole. Indeed it is a fairly easy way of getting even the most disengaged learner to sit up and take a bit of notice of what is going on! However it is also a really useful piece of animation. Teachers’ can use the animation to get pupils thinking about how and why an Interpretation has been developed; it can be assessed for it’s accuracy and, alongside other sources, can be used as a means of comparing and contrasting Propaganda films of the period. 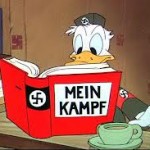 The Disney Corporation made a large number of cartoons relating to the war. They formed an integral part of the Allied, particularly the US’s, propaganda efforts during the war. These ‘shorts’ are available to purchase: