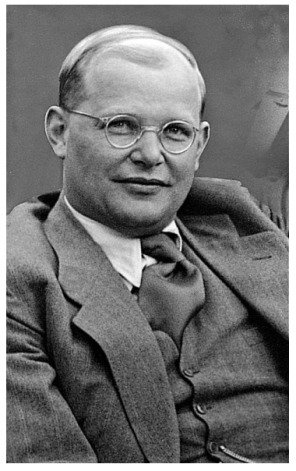 Dietrich Bonhoeffer was an ordained priest who spoke out against Nazism. Bonhoeffer’s opposition to the Nazi regime took the form of speaking out; being involved in the Congressional Church; preaching and writing and through using his position in the Abwehr to undermine Nazi policies and actions. He was executed for High Treason in April 1945, just weeks before the end of the Second World War.

Bonhoeffer engaged in Anti-Nazi activity from his ordination (1931) until his execution. German church leadership was elected. In 1932, prior to Hitler assuming power, Bonhoeffer was an activist in these Church elections. He warned of a potential schism in the church as external political forces seemed to be tearing the establishment apart. In 1933, days after Hitler became Chancellor, Bonhoeffer spoke on radio. In his broadcast, which was cut off during live transmission, Bonhoeffer warned against Germany indulging in a cult of ideology and bemoaned the way in which Hitler was idolised.

As the Nazi’s sought to assert themselves over all areas of the State and Society, they inevitably turned to the Churches. Despite an election to regional synods having only taken place the previous year, a new election was called. Bonhoeffer spoke out against Pro-Nazi candidates: the Pro-Nazi candidates were extremely successful though, winning a majority in most regions.

Bonhoeffer also spoke out against Nazi Anti-Semitism. As early as April, 1933, he spoke about the attitude of the regime to the Jews and exclaimed that the church should not:

,h2>“bandage the victims under the wheel, but jam the spoke in the wheel itself.”

Note: this precedes the Nuremberg Laws by two and a half years.

In Summer of 1933 Bonhoeffer and another leading theologian, Herman Sasse, were asked to write what became known as the Bethel Confession. This was a statement of faith that flew in the face of the teachings of the Reich Church. However, before it was published it was edited to a point that Bonhoeffer refused to sign his name to it.

Instead, he turned, in September 1933, to Pastor Martin Niemoller. Together they formed the Pfarrernotbund and after fairly blatant attempts by the Nazi Party to politicise the main churches in the Reich, arranged a meeting at a Confessional Church in Barden.

The Confessional Church will be covered elsewhere in more detail. In summary, it opposed Nazi interference in ecclesiastical (Church) affairs.

Bonhoeffer then spent several years travelling, preaching and writing. In 1938, after returning from a trip to the United States, Bonhoeffer was introduced to a number of Abwehr agents. The Abwehr was a State Police operation. Its role (loosely speaking) overlapped with that of the Gestapo. The agents whom Bonhoeffer had been introduced to were not supportive of Hitler and the State. These Abweher agents managed to have Bonhoeffer appointed to their organisation, arguing that his role within the Christian Ministry would be useful for intelligence gathering.

In this role Bonhoeffer was able to travel through Germany and into annexed and occupied territory. He almost certainly learnt of failed plots against Hitler, and would have been aware of the Persecution taking place throughout the Reich. Bonhoeffer used his Abwehr role to visit places such as Norway, Switzerland and Sweden. He met with supporters of the Confessional Church whilst on these travels and effectively became a double agent. During these travels and meetings he broached the subject of a post Hitler Germany and attempted to open discussions with Allied authorities about Peace terms in the event of a successful cop d’etat.

Bonhoeffer was executed in April, 1944, for his role in plots against the state.

“the blood of martyrs might once again be demanded, but this blood, if we really have the courage and loyalty to shed it, will not be innocent, shining like that of the first witnesses for the faith. On our blood lies heavy guilt, the guilt of the unprofitable servant who is cast into outer darkness”

“We have been silent witnesses of evil deeds; we have been drenched by many storms; we have learnt the arts of equivocation and pretence; experience has made us suspicious of others and kept us from being truthful and open; intolerable conflicts have worn us down and even made us cynical. Are we still of any use? What we shall need is not geniuses, or cynics, or misanthropes, or clever tacticians, but plain, honest, and straightforward men. Will our inward power of resistance be strong enough, and our honesty with ourselves remorseless enough, for us to find our way back to simplicity and straightforwardness?”

Bonhoeffer, Letters and Papers from Prison.

“If we look more closely, we see that any violent display of power, whether political or religious, produces an outburst of folly in a large part of mankind; indeed, this seems actually to be a psychological and sociological law: the power of some needs the folly of others. It is not that certain human capacities, intellectual capacities for instance, become stunted of destroyed, but rather that the upsurge of power makes such an overwhelming impression that men are deprived of their independent judgment, and…give up trying to assess the new state of affairs for themselves.”

Bonhoeffer, Letters and Papers from Prison.