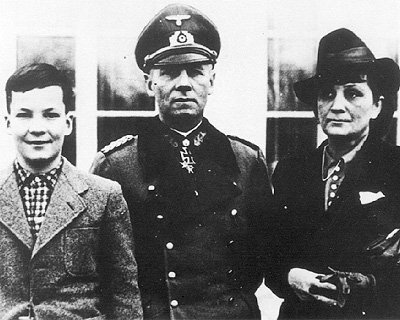 Rommel’s role in the July Bomb Plot has been much debated by historians. Rommel was implicated in the July Plot and offered a choice of suicide, and an honourable death, or facing the People’s Court; which would have resulted in almost certain execution for himself, his family and his aides. Rommel chose suicide and the promise of safety for his family.

The extent to which Rommel was active in plots against Hitler is an area in which there are some uncertainties.

Evidence that shows that Rommel was a participant in plots against Hitler and the leadership of the Third Reich:

– Rommel was cited as a possible successor to Hitler, and mentioned as someone worthy of holding positions of high rank and status in a post-Hitler Germany. Goerdler mentioned Rommel in such a way in letters. His name was also mentioned during the interrogations of Stülpnage and von Hofacker.

Rommel being mentioned does not necessarily mean that he was an active (or even non passive) participant in any plot. The latter two examples are both from the interrogation room. People in that situation often say things that are not true, or exaggerate things for their own good. Goerdler’s references are certainly worthy of investigation.

This could mean all manner of things. He may well have complained. His complaints may have meant that he disliked the leadership, though just as likely, that he was frustrated at not being able to get on with his job as a professional soldier.

There are numerous references to Rommel’s knowledge of the plot in academic books and in interviews conducted after the war.

These provide examples of Goerdler making offers to Rommel; of Rommel being made fully aware of the aims of the plot and asked for his opinion about the plot and the way in which a post-regime Germany ought to be run. This section of the Wikipedia entry about Goerdler refers to Rommel on a number of occasions. There are references for many of the statements to substantiate the claims.

In the post war era it has been revealed that British Intelligence had knowledge of Rommel’s desire to see Hitler killed. The video below outlines, rather briefly, this evidence:

What appears to be the case is that Rommel was ‘sounded out’ about the wartime situation. It is possible that he knew about the Plot. It is probable that he would have contemplated life after Hitler – afterall, there had been numerous attempts on Hitler’s life. What is in doubt though, is exactly how much he knew about this specific plot; what ‘evidence’ was actually held by the Gestapo about Rommel and whether the ‘need’ to have Rommel dead was driven by actual evidence of High Treason, or paranoia and fear that he may have been actively involved.

Online Sources used whilst preparing this article include: