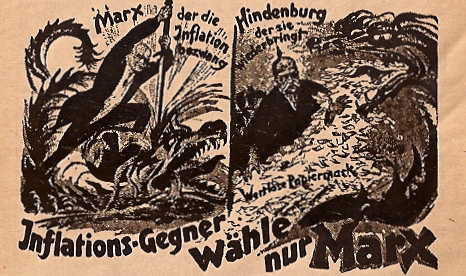 In 1925 Germany held its second Presidential election. The incumbent President, Friedrich Ebert, was expected to win the election by a landslide. However his untimely death shortly before the first round of voting left the issue of Presidency quite open. 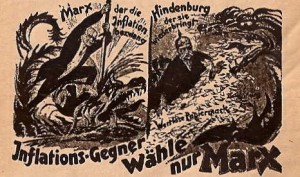 The election of a President had initially been scheduled to take place some time earlier, in 1922. However the constitution was amended to extend the term of office as a result of the troubles that the Weimar Republic was facing at that time. In 1925 Friedrich Ebert was not particularly loved by the German population, but was respected for the way in which he had handled the turmoil of the Republics early years. His death meant that a new President would be elected and provided opponents of the regime with an opportunity to exploit the situation.

The Presidential Elections were conducted over two rounds, with less popular candidates dropping out after the first round.

The First round results were:

Following the first round of votes the most popular of the candidates, Karl Jarres, withdrew. It may seem odd that the leading candidate would withdraw. He did so to provide a platform for the popular former General, Paul von Hindenburg. Hindenburg was not only a popular figure throughout Germany but he was also a committed monarchist. Jarres decision to withdraw in his favour was done quite probably in the hope that not only would Hindenburg win but that as President he would ensure a more conservative and traditional form of Government.

The Second round of voting saw three candidates. Hindenburg represented the conservative, monarchist and right wing parties. Voters wanting a more left wing President had two options: Wilhelm Marx, of the Centre Party was one, and Ernst Thalmann of the KDP (Communist Party) was the other. The participation of Thalmann was a decisive factor in the result. Had he not stood it is quite possible that people who voted for him would have cast their vote for Marx – which would have resulted in a different outcome.

The second round of votes had the following results:

As a result, Paul von Hindenburg was elected as the second President of the Weimar Republic.

One thought on “German Presidential Election of 1925”