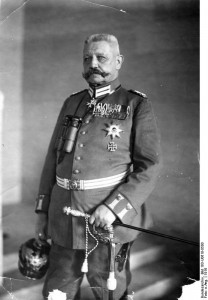 Paul von Hindenburg was a reluctant and ageing politician. Famed throughout Germany as a leading General, he won the 1925 Presidential election as a conservative right wing candidate. Many hope that he would undermine the republic and enable a return to Pre-war methods of rule in Germany.

Hindenburg as a President wasn’t as right wing or ‘undermining’ as many had anticipated. However he remained popular enough to see off a challenge to his role in the 1932 Presidential election from Adolf Hitler.

Below is some footage of Hindenburg reviewing a guard of honour. Lots of similar clips can be found on the British Pathe website. many schools can download from the site free of charge due to the terms of their agreements with Regional Broadband Networks. Check with your ICT department if you are unsure about how to access and download these materials.