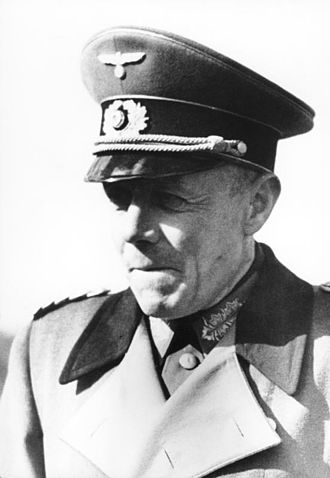 Ludwig Beck and the Army’s Opposition

Ludwig Beck is remembered as one of the leading opponents of the Nazi regime and Hitler’s aggressive foreign policies. Beck had risen through the ranks of the Reichswehr. In 1933 he was appointed Adjutant General and, in 1935, was promoted to the rank of Chief of Staff: the most senior position within Germany’s armed forces.

Ludwig Beck was an ‘old school’ military leader. He believed in careful planning and consideration of the wider implications of a military action. He retained faith in the pre-Nazi system of military leadership – that of relative autonomy – and was one within the armed forces who was concerned about the militarisation of the SS.

In 1938, Beck resigned as Chief of Staff. He did so in protest at Hitler’s decision to forcably annex the Sudentenland. He had attempted to prevent the actions against Czechoslovakia, belieivng that the Wehrmacht was ill prepared for any escalation of the conflict. He hoped that others within the senior ranks of the army would follow his example: they didn’t.

Beck’s opposition to Hitler had simple enough origins. He opposed the timing of actions, rather than the principles behind them. With regard to the Sudetenland, his objection was that it was too soon, and that any escalation would lead to a situation that Germany could not conceivably win. In pursuing the risk taking options, Hitler alienated Beck. Beck was cautious and wanted surety of victory in isolated campaigns. As the Sudetenland Crisis mounted, Beck sought to encourage a mass resignation of senior officers should the plan be executed. The aim was to ensure that a war, that he thought was unwinnable, would have to be delayed by Hitler. Beck was wrong on two assumptions though: first, he thought that Hitler was being badly advised, and that a change in the military organisation and advice would rectify this. This was wrong, as it was Hitler who was pushing for action, not other senior military officials, as Beck had believed. Secondly, Beck assumed that other senior officers would agree with him and be willing to take action to stop action against Czechoslovakia. The degree to which other officers sympathised with Beck’s view is hard to ascertain, but they were certainly unwilling to make such a public denunciation of Hitler and did not resign en mass as Beck had hoped.

Following his resignation, Beck discussed military matters with other leading members of the military and some senior Government officials. This discussions were often opposing the regimes policy. In general, the views could be broken into two quite opposite positions about what was needed.

On one hand, there were the likes of Beck, Canaris and other senior officials who felt that Hitler needed to be reigned in.

On the other, were some who believed that Hitler was hell bent on a war that would be devastating and that Hitler needed to be removed.

Beck soon became involved in discussions about the future of Germany. He, along with other opponents of the regime, began planning a Putsch. This would overthrow Hitler and place Beck as leader of a replacement government. The plotters went to some lengths to gain support. They made contact with the British Foreign Office and held talks with representatives of the Pope. These plots though, were merely discussed and an attempt to implement it was not made in the early years of the war.

In 1943, Beck and his associates did make plans to overthrow Hitler. The tide of the war was turning against the Third Reich. Now was an opportune time to undertake a Putsch, remove Hitler and gain a respectable peace: with Beck as head of the new state. These aborted plots involved assassinating Hitler through use of a bomb. The 1943 plots did not go ahead. However in 1944, the plotters had gained more confidence. They had widened their reach into the senhior ranks of the Wehrmacht and had a new recruit, von Staffenburg, who was proactive and determined to execute the planned Putsch.

The military opposition to Hitler put this plan into action in July, 1944. Von Staffenburg planted a bomb close to Hitler. It went off. However it did not kill Hitler and in the confusion following the explosion, the plotters failed to put into action the plans to overrun key locations in Berlin.

In the following days and weeks many of the plotters were arrested by the Gestapo. Ludwig Beck was amongst them. He was arrested and offered the option of taking his own life. He attempted to do so but managed only to injure himself. His fate was sealed by an observing Sergeant who finished the job for him.

Was Beck opposed to Germany going to war?

No. Beck had agreed that war was probably required in order to restore Germany to her position of dominance within Europe. Beck’s view was that such military actions pught to be limited in their scope and should not put Germany in a position of having to fight a prolongued war against several enemies. To this end he supported the Re-occupation of the Rhineland and, once it became apparent that the major powers would not intervene, had drawn up orders for the occupation of Austria.

What was Beck’s ‘problem’ with Hitler?

Beck’s attitude towards Hitler changed over the years, especially so once the war was underway. He liked the idea of a strong leader – which he thought Hitler was. However he had reservations about the role of the SA and SS and wanted to ensure that the Military aspects of Foreign Policy were controlled by senior military officials. This led to him disapproving of plans for the operations against Sudentenland and later the rest of Czechoslovakia. This was not a moral objection: he had himself drawn up memorada relating to the division of Czechoslovakia. It was an objection based on his perception of the consequences of such actions – ie, he thought that it would lead to a war for which Germany was simply not capable of winning. As the Second World War in Europe progressed the actions of Hitler further alienated Beck. Military decision making seemed odd, at best, and Beck came to the conclusion that Germany would be best served if Hitler was no longer in command.