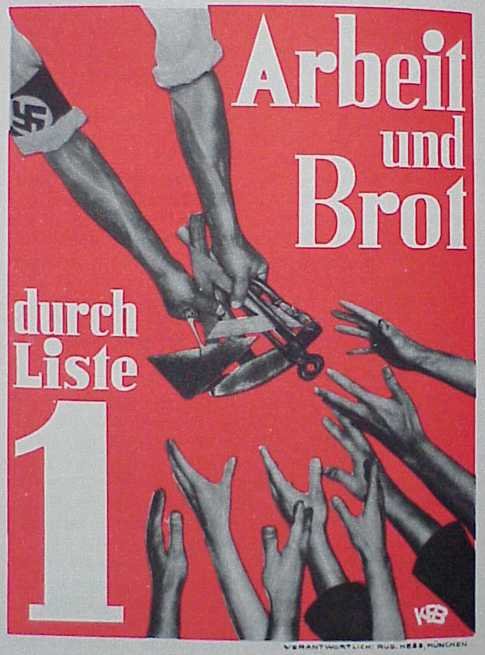 The Nazi Economy is an important part of many courses at GCSE and A-Level. Different specifications have different time scales attached to the economy. Some stop, as this post does, at 1939 whilst others include the War Economy – which will be covered in a separate post.

SFA History provide a really useful overview of the way that Life in Nazi Germany changed. This helps pupils to understand the context in which the Economic changes and policies were being introduced.

Wikipedia have an article dedicated to the Economy under the Nazi Regime. As usual, there are hyperlinks included to relevant people, departments and political ideas and pieces of legislation.

History Learning Site provides an excellent overview of the way in which the German Economy was managed by the Nazi Regime. As the site is written by an experienced teacher, it tackles key issues that are on the curriculum.

BBC Bitsesize. 5 pages from the BBC on the issue of the nazi Economy and the way it changed life for those living in Nazi Germany. Based on the WJEC syllabus.

Another BBC Bitsesize entry about the Nazi Economy. This time, not board specific.

Interactive Diagram on the Nazi Economy

The Nazi Economy. A pupil created video. Quite different in it’s method of presenting the facts – but something that many pupils will find engaging and accessible.

A short Go Animate cartoon involving, erm, Schacht and Goerring discussing their policies. Midly amusing and does provide a succinct overview of the main points.

The Education Forum. Notes and tasks in a pdf document.

Lesson plan and resources on the Nazi Economy. This makes use of Paul Ginnis’ Quick on the Draw technique and is adaptable for purposes of differentiation, or to suit different lengths of lesson.

Did the Nazi’s perform an Economic Miracle by the outbreak of the Second World War? A resource sheet to help pupils write a good essay length answer to the question.

Were Germans better off under the Nazi’s? Powerpoint and a selection of worksheets.

How did Hitler deal with Unemployment and the workforce? Notes.

Quizlet flashcards on the Nazi Economy. Aimed at AS Level pupils but useful for many GCSE classes. Ideal for use on an IWB as a recap, revision or plenary activity.

Another Quizlet about terms relating to the Nazi Economy.

Did Life Improve in Nazi Germany? Wordsearch on TES Resources.

Powerpoint based quiz on the Nazi Economy.

Quizblo quiz on the Nazi Economy.

Hjalmar Schacht and the Reich’s economy

Hjalmar Schacht – from the Spartacus Encyclopedia

Schacht’s involvement with the Nazi Government – from Wikipedia

The Nazi party did not adopt work creation as a key part of its programme until the late spring of 1932, and it retained that status for only eighteen months, until December 1933, when civilian work creation spending was formally removed from the priority list of Hitler’s government … [Work creation] was in sharp contrast to the three issues that truly united the nationalist right . . . the triple priority of rearmament, repudiating Germany’s foreign debts and saving German agriculture … It was Hitler’s action on these three issues not work creation that truly marked the dividing line between the Weimar Republic and the Third Reich. (Adam Tooze, The Wages of Destruction, Viking, 2006, pp. 24–5)

On 18 October [1936] Goering was given Hitler’s formal authorization as general plenipotentiary for the Four Year Plan. On the following days he presented decrees empowering him to take responsibility for virtually every aspect of economic policy, including control of the business media. (Tooze, pp. 223–24.)

This office (theReichswirtschaftsministerium in Nazi Germany) tells the shop managers what and how to produce, at what prices and from whom to buy, at what prices and to whom to sell. It assigns every worker to his job and fixes his wages. It decrees to whom and on what terms the capitalists must entrust their funds. Market exchange is merely a sham. Source Mises.org