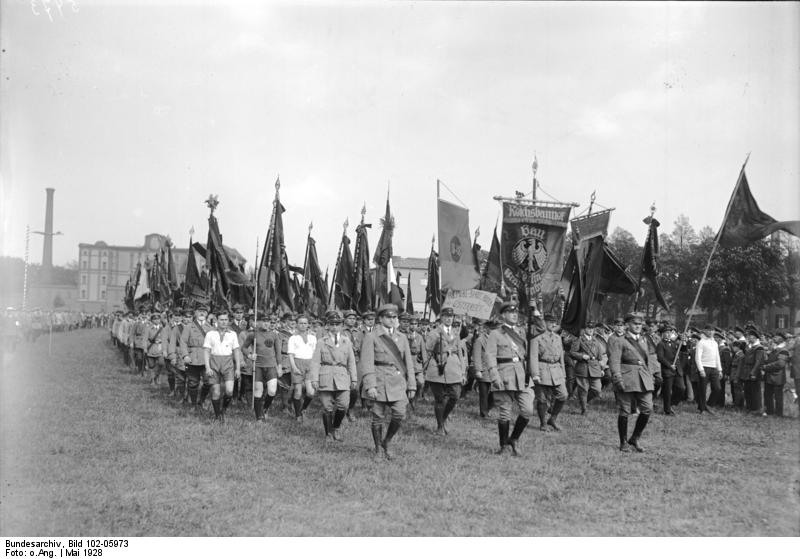 Reichsbanner Schwarz-Rot-Gold had representatives from the 3 main centrist parties: Social Democratic Party, German Centre Party and German Democratic Party. As such it sought to represent the Trade Unions (non militant ones). It was established as a reaction to the actions of paramilitary wings of the Communist Party (called the Rotfrontkämpferbund) and the Sturmabteilung (SA) of the Nazi Party. Indeed, it was the actions of the SA and the Nazi Party at the Munich Putsch that led to the moderate parties meeting in Magdeburg to form the Reichsbanner organisation. 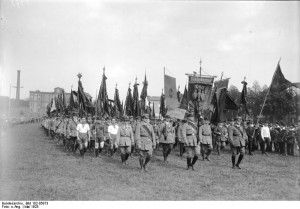 Membership of the organisation was open to former servicemen. They would march at party meetings and act as a protection squad against attacks from the extremist paramilitary groups. As fighting with the KPD and Nazi’s intensified in the early 1930’s a special unit, The Iron Fist, was established to deal with the more violent approach they were combating. They also restructured their organisation and introduced a Youth Wing.

After the organisation was banned it, like most opponents of the Nazi’s, saw many of its members arrested. Other members looked to join underground movements. Some leading members of the Reichsbanner movement continued to resist the Nazi’s throughout the course of the Third Reich. For example:

Walter Schmedemann, operated a resistance cell until being arrested and sent to Sachenhausen. Whilst imprisoned he worked to ensure that forced labourers were fed.

Karl Henrich and Theodor Haubach operated an illegal, underground, version of the Reichsbanner organisation that reputedly had 1000 members. Henrich spent much of the remainder of his life in concentration camps and prisons. Haubach spent some time in prison but was released in 1935. He made contacts with members of the Kreisau Circle. After the July Bomb Plot he was again arrested. He was found guilty of treason and executed in January, 1945.