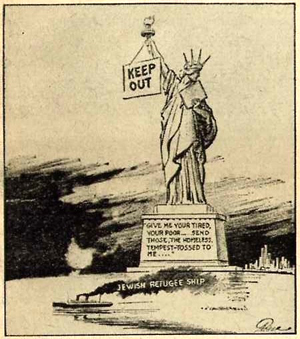 The plight of the Jews of Germany and Europe was an issue that courted controversy in the United States. Whilst disgusted at Nazi actions, political sentiment in the US was, before their entry into the war, one of isolationism. There were some attempts made by politicians to aide the Jews of Germany – following Kristallnacht, and Europe, following the outbreak of the war and Nazi occupation of territories. 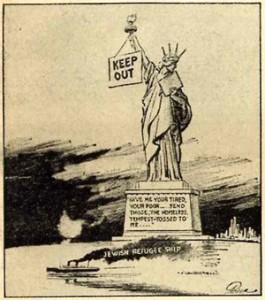 In general however, the US population was opposed to immigration at the time: no matter what the reason. This led to attempts by some to increase the number of Jewish migrants to be rejected by senior politicians. However from Kristallnacht onwards there were those in the United States who were critical of the lack of action and the political decisions being made. These sentiments of opposition to government policy were illustrated by a number of well known cartoonists.

The slideshow below includes a selection of the better known cartoons that were critical of US policy on Jewish immigration in this period:

There are several books on this topic. Below are links to reviews of one of these, ‘Cartoonists who opposed the Holocaust’.