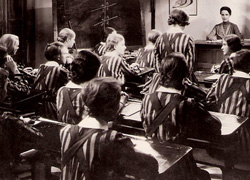 Archived films can provide a great insight into life in Weimar Germany. However whilst it’s relatively easy to find materials pertaining to national Socialism, the same isn’t always true of the Weimar era. Here’s a list of places where I’ve found suitable archived film relating to Weimar Germany.

The German Museum of Cinematography is a good place to find titles of films – both feature and documentary – from 1895 through to the modern day. The site takes a bit of getting used to but has helped me to identify films that may be of use. The downside is that you’ve then got to find them elsewhere…

Alpha History have done a good job of finding and listing existing video clips on this period. Some great footage is listed on the site which is great for visualising different aspects of life in Weimar Germany.

Filmportal.de is a very good source of video footage. Its film archive contains materials covering several periods but also has a dedicated section relating to the Weimar era. Many of the titles listed on the site are also available to view online via their video hosting.

The Harvard website has a useful list of films that were released during the Weimar Era. At the time of writing all of the films in the list could be found – or at least parts of them could be – on Youtube.