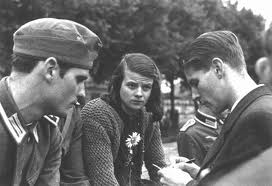 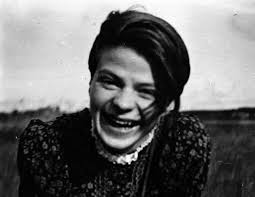 Sophie Scholl enrolled at the University of Munich in May 1942, following her National Service. Here she was introduced to the friends of her brother, Hans Scholl. This group of friends had a shared interest in culture and philosophy. It was the latter of these that led Sophie Scholl and her friends to discuss issues such as the role of the Individual within a totalitarian state.

These informal discussions soon  led to a more organised opposition to the regime. Several members of the group were sent to the Eastern Front for a 3 month posting (this was commonplace for medical students during the war). They saw the conditions on the Eastern Front at first hand, witnessed atrocities against Soviet Forces and were eyewitnesses to the way in which the Jews of Eastern Europe were being treated in the summer of 1942.

These experiences, along with German reversals on the Eastern Front and an increase in rumours about the whereabouts of the Jews led to the group making the decision to act. This decision saw the forming of the White Rose movement. In a Police State doing anything ‘against’ the state was dangerous, yet this group were willing to take the risk and publicise what they had learnt.

The White Rose movement distributed 6 leaflets in and around the campus of Munich University. They were aided by some members of staff who sympathised with their views.

Isn’t it true that every honest German is ashamed of his government these days? Who among us has any conception of the dimensions of shame that will befall us and our children when one day the veil has fallen from our eyes and the most horrible of crimes– crimes that infinitely outdistance every human measure– reach the light of day?

Each of the leaflets produced by the White Rose was tantamount to Treason. Knowing this the leaflets were dropped at places such as phone boxes, or left in bars or cafes.

The fifth leaflet produced by the White Rose provoked a serious response from the Gestapo and the state authorities. It called for active resistance against the regime and openly opposed Hitler and the ‘criminal’ dictator state.

Following the news of the German Army’s defeat at Stalingrad the White Rose movement created a 6th, and final, leaflet. Again it called for action against the state. Whilst distributing the leaflet in the University on 18th February 1943, Sophie and Hans Scholl were seen throwing leaflets into the air by one of the caretaking staff. Soon afterwards Sophie and Hans Scholl were arrested. They were interrogated by the Gestapo before being tried for Treason on 22nd November 1943. Both were found guilty of treason and sentenced to death. The sentence was carried out the same day, at 5pm in the prison in which they had been held.

Despite the best efforts of Sophie Scholl to hide the identities of other members of the White Rose movement, the Gestapo were able to round up and arrest the majority of leading members of the group. Over the course of the rest of the war numerous members of the White Rose were put on trial. They’re sentences ranged from execution to prison sentences. Several members survived the war, in large because trial dates had to be changed due to Allied Bombing raids.

Transcripts of Sophie Scholl’s interrogation have been used to make a film about the White Rose movement. A second hand copy of the film is usually available via Amazon for a relatively low price: